Soup of stone or stone soup is a typical soup cooking Portugal, in particular the city of Almeirim, located in the heart of the Ribatejo region, considered the “capital of stone soup.”

Contrary to what the name implies, the stone soup is a soup with many ingredients, in which the “rock” is just the “pretext”. This designation is found in many western cultures and is based on a legend.

Stone Soup is also the title of a comic book, translated from an US edition entitled Stone Soup.

A poor monk, who was on pilgrimage came to a house, and too proud to simply ask for food, asked the owners of the house to lend you a pot for him to prepare a soup – stone … and took from his knapsack a beautiful smooth stone and well washed. The hosts were curious and immediately let him enter the friar to the kitchen and gave him the pot. The friar put on a pot with only the stone, but then said he had to temper the soup … The landlady gave him the salt, but he suggested that it was better if it was a bit of sausage or bacon. And there was the grease to the next stone. So the monk asked if had not anything to thicken the soup, such as potatoes or beans that were left over from the previous meal … So thickened the soup “stone”. Joined carrots, over the meat was attached with the beans and, of course, resulted in excellent soup.
Ate the soup together and in the end the monk carefully removed the stone pot, washed it and returned to save it in your knapsack … for the next soup!

One of the best restaurants to eat this soup – O Toucinho 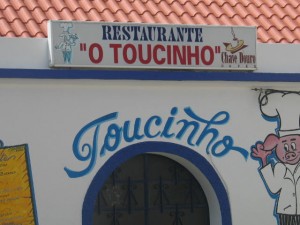