The Ribatejo is bordered on the north-west with the Beira Litoral, the West and the South with Extremadura, the Southeast with the Alto Alentejo and the North and Northeast with Beira Interior. Its headquarters and largest city is Santarém. 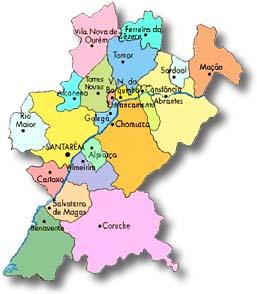 O their former territory breaks down today by the Alentejo, Centre and Lisbon, and by 2002 was the core of the former region of Lisbon and Tagus Valley. In terms of subregions, finds itself divided by the Greater Lisbon (municipality of Vila Franca de Xira), Alto Alentejo (Ponte de Sor municipality) and also for the entire sub-region of the Tagus Wetland and the entire Middle Tagus (with the exception of county Ourem).