The National Horse Fair, 1 2 also known as Feira da Golegã, takes place annually in Golegã in the heart of Portugal, right in the Ribatejo, between the rivers Tagus and Almonda.

Characterized by the fertility of its soil, the abundance of pastures and the beauty of its countryside markedly, Golegã retains the traditional Portuguese architecture. According to several authors, the Golegã Village originated in the time of King Afonso Henriques and Sancho I, when a woman’s natural Galicia and lived in Santarém came settle down with an inn on this site. Golegã that already existed in the fifteenth century, it seems beyond doubt, and after having established it said Galician, having spent its name to Sale of the Galician, the Galician Varzim, Vila of the Galician language and later by corruption “Golegã”. 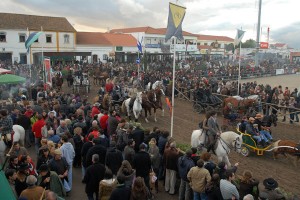 In 1571, begins the current Fair St. Martin Golegã today also National Horse Fair and International Fair Lusitano Horse. From 1833, and with the support of the Marquis of Pombal, the show began to take an important competitive nature, performing equestrian competitions and different races competitions. The best horse breeders were concentrated then in Golegã. In the mid-eighteenth century, had its beginning the Fair of Golegã, called until 1972 Fair St. Martin, the date from which came to be called the National Horse Fair. It is the National Horse Fair the most important and most Castiça of all fairs of its kind taking place in Portugal and worldwide. Here we present all breeders, with its beautiful specimens, which is why we transact in Golegã Thoroughbreds best created in the country, which are sold to many parts of the world, the most important national event Equestrian and the largest warehouse Commercial Lusitano, recognized worldwide. 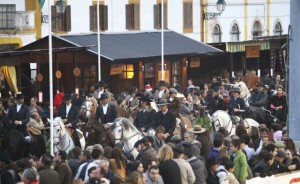 Golegã became the capital of the horse. The day of St. Martin of Fair, which was traditionally the day November 11, went to be more beautiful and unique public equestrian show performs the free level between us. The testing program is very extensive and varied: Ralies, Raids, Equestrian Games, Championships, Carriages Marathon, Views, are some of the finest performances in Golegã take place in his presentation of the horse. And to complement party justifying the popular adage that “At Saint Martin taste the wine,” there are plenty of water-walking and the roasted chestnuts.